The great thing about having twins is that they always have each other. G and T shared a womb, then a cot, then a room... They had a friendly face there when they started playgroup and nursery. They're best friends, confidantes and constant companions.They have a hand to hold and a shoulder to cry on. They're so lucky.

But the problem with having twins is they always have each other. 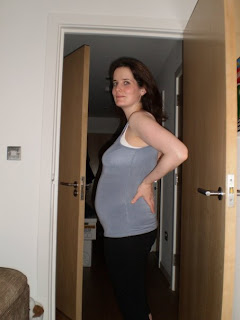 From the time they were a little bump, the twins have shared everything

I read recently about a fellow twin mum who's started having the occasional day where she drops just one at nursery, and enjoys some one-on-one time with a single child at a time.

I've spent the past three-and-a-half years ensuring that G and T are individuals. I didn't give them matching names, I've never dressed them alike, and wherever possible, I buy them different toys. But in my quest to make sure no one sees my girls as a set, it seems I may have overlooked someone Me. 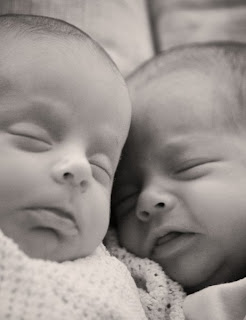 They've always had someone to snuggle up to

It's been a great comfort as I've (reluctantly) sent the girls out to face the big bad world that even when they don't Mummy there, they do have each other. But I realise now that not only do they have each other there when Mummy's not around. They have each other there when Mummy is around. M gets some time with me when the girls are at nursery, but the twins have never really had me to themselves. I'm constantly saying: 'One minute, Mummy's just...' or 'I just have to finish this with your sister...' or 'I only have one set of hands!' My children always have to fight for my attention. Maybe it's time they didn't have to. 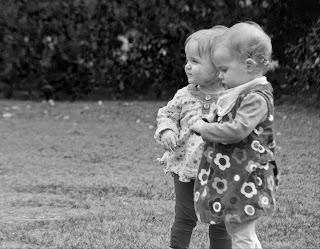 I had a small taste of singleton time with T when I took her to the doctor the other day to have her eczema checked. Now, my little T can't exactly be accused of being short on words at the best of times, but realising she had me to herself, she went into overdrive. She literally did not stop talking the whole way there. And I mean literally. She barely stopped for breath. She knew no one was going to interrupt her, so she made the most of every second. I heard all about every one of her favourite toys, we discussed nursery and teatime and Minnie Mouse. In the waiting room, she delightedly played in the toy house they have set up, making me (and an obliging other patient) cups of tea, and blowing me kiss after kiss. She loved it. And so did I. I didn't feel like I was neglecting anyone, I didn't have to stop her short or put her off. I could listen and play and cuddle just her.

My only regret was that I didn't get to do the same with G. 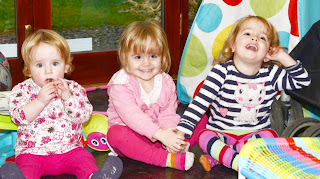 My gorgeous girls make a cute picture, but they aren't a set!

So, I'm going to do it. I'm going to make a point of getting one-on-one time with all my girls. The twins have been loving nursery since they got back after Easter, so I may try just taking one at a time for a few days. Or, as that thought still makes me a bit shaky, I might line up Granny to watch a couple of kids at a time. The twins aren't a set, so I should stop treating them like one.

Having a best friend on hand every day sounds like a dream, but even the greatest of mates need a break from each other sometimes. And sometimes, a girl just wants her mummy all to herself.