It was the end-of-term nursery assembly. We been looking forward to it for weeks. With the twins showing great leaps in confidence, finally seeming to really enjoy going to preschool, we couldn't wait to see the effects on stage. At the Easter show, both had shyly performed a few actions, but didn't seem to want to sing anywhere near as loudly as they do at home. Now, though, our hopes were high.


G and T have both come on in leaps and bounds. T especially always bursts in each day, showing off whatever she's wearing to teachers and children alike, and throwing herself into the nearest game. G is still the shyer of the two, but she always seems pleased to be going, and has begun to talk to the teachers in a voice they can actually hear. They have both spontaneously drawn pictures at home that they insist on taking to their teachers, and are always telling tales about their little friends. In the dance class I take them too, they are in their element. By all accounts, they have the whole class in giggles as they gleefully pretend to be elephants or fairies. At home, they sing from dusk until dawn. They know the words to any nursery rhyme you could care to mention, and aren't afraid to ad lib if they do find themselves at a loss. In short, I was sure they were going to stand on that school stage and shine.
And, well, one of them did. T grinned from start to finish. She joined in all the actions, smiling a huge smile at the teacher hidden away behind the curtain if she did need a memory prompt. She looked so proud as she waved to Mummy and Daddy, Grandad, Grandma and her wee sister, and laughed and smiled with the little girl seated next to her. M, in the audience, copied along as best she could, singing and wiggling and generally having to be restrained from jumping on the stage. My girls are clearly born performers. Well, two of them are.
G did nothing. Seated on the other side of the stage from her sister, she sat cross-legged, with her arms folded in front of her and didn't utter a word. She'd been handed a pair of socks to hold up during the Spotty Sock Song, but they sat, untouched, on her laps, despite the best encouraging efforts of her teacher. When she had to move at one point when a few of the older kids stood up to sing, she was physically shuffled along by the teacher. Nothing could bring a reaction. She was still. Mute. It broke my heart.


Maybe she wasn't as confident as I'd thought. Maybe she was still scared. She looked so small. I wished they'd seated her with her sister, sure that she would have felt so much more comfortable. Sure enough, as they filed out, at the end, I don't know whether G reached for comfort or if T sensed her sister needed her, but they were hand in hand. I melted. They had each other again. They could always have each other. With still a year left to make the decision, I resolved there and then that I would request they be placed in the same class in primary school. My husband and I talked about it that night.
'I think it made the school decision easier,' I said after we'd discussed the show.
'Yes,' he nodded. 'I think it is right to separate them.'
Maybe we need that year to decide after all.
We both saw each other's arguments. I feel they have a huge advantage and I don't see why we should deny them it. I know most kids goes to school alone, but they haven't had a constant companion their whole life. They've faced everything together. We would be ripping the girls apart. But they are by no means joined at the hip in nursery, often playing separately and barely noticing if the other is taken out of the room. I don't think they need to be split up, so why do it?
My husband meanwhile pointed out that G perhaps needed a push out of T's shadow. She's perfectly happy playing alone, but tends to follow T's lead when joining with others. Most of their friends I think are ones T has made for both of them. If they go to school together, they'll probably sit together and the pattern will continue. Perhaps they'd both benefit from having to find their own way.
We ended up even arguing the other's side. My ever-practical husband wondered whether separate classes would mean separate activities, and our lives would become a logistical nightmare. I meanwhile, conceded that it would be good for the girls not to be seen as a set. Although I think this is far less of a problem for non-identical twins like mine, there is a tendency to see multiples as a unit, to think that they share the same skills, have the same personality. Nothing could be further from the truth with G and T, but perhaps our placing them in the same class would emphasise this stereotype.
We were getting nowhere. All I knew was that the thought of separating them was like a dagger to my gut. And that my finding it difficult shouldn't be a determining factor.
For now, I'm going to have a word with G's key worker, and check that my original thoughts were correct. That G has grown in confidence, and that the show was a blip. I hope that she shows her true personality to everyone there. She is brights, bubbly, emotional, feisty and oh so clever. I worry that by being shy, she is not being stimulated. She has always has a flair for language, and having been doing spelling and phonetics at home, both G and T are starting to be able to read. If she says nothing, will she be getting bored? Do the teachers have any idea what she's capable of? Or does she sit quietly, saying nothing?
I take comfort in my own early school reports, which always highlighted my good test scores and obvious intelligence (my skills may have waned in the past three decades, but I was quite the clever 5-year-old you know!) but time and again, said I was painfully shy. My parents couldn't understand it, often double-checking the name on the report. I was anything but quiet at home. I was cheeky and loud and always had to be the centre of attention. I eventually came out of my shell in the outside world, and I'm sure G will too. I just can't decide how best to help her do it.
To separate or not the separate. We've got a year to decide... 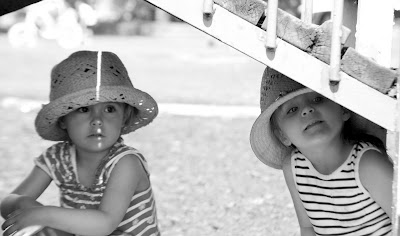