I just can't get over the fact that just under 18 months ago, I arrived home with a squidgy, wrinkly bundle of toes and fingers. Little M never actually seemed that little to me - she was born a chubby 7lb8oz, while her sisters had been only 6lb1 and 5lb4 - but she was still my little baby. Helpless, clingy, unformed. With two not-quite-2-year-olds, I had a living demonstration of how quickly that would change. How quickly she would become real. A fully-formed person. How soon she would be her. But as I spent a gooey few minutes looking through old pictures recently, I still couldn't quite grasp that that tiny little baby was the cheeky, boisterous, stubborn toddler I enjoy (or at least endure) today. 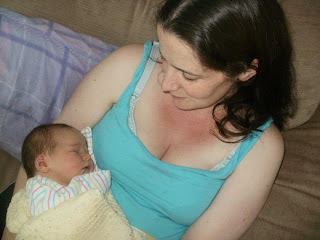 When I was first pregnant with the twins, so many mums gave me the same piece of advice: 'Enjoy them while they're tiny.' But I found that a really hard thing to do. Of course, I loved them and was overjoyed to finally be a mother, but it was hard. Bloody hard. They fed all the time, wouldn't be put down, left me sore in all the wrong places... And I couldn't see an end. Of course, you know, logically, that there is an end. They will start to smile, to laugh, to crawl, to walk, to talk... But in those early days, those early exhausting days, it all seemed so far off. So theoretical.
With M, it was different. I'd done it all before. I knew what this baby would become, and instead of wishing away every day, hoping for the next thing that would make it easier, I reveled in it. I loved having a baby again. Of course, it helped that there was only of her, but I was also just a better mum. Feeding, which had been a battle with the twins (well, one twin. G would cling on to her side, no matter what her sister was doing on the other one!) was a breeze. I was so much more relaxed, and M was a dream feeder. I really appreciated the helpless phase. If I put her somewhere, she stayed there. Having two hyper toddlers around would make anyone appreciate that. I wasn't watching for every milestone, every sign I was doing something right. I just drank in every moment of her babyhood.
As it turned out, she chalked up the milestones even quicker than her sisters had. Sitting up alone by six months, crawling at eight, walking at ten, talking before she was 1... It seems despite my newfound love of the baby days, M was on a mission to be a toddler. Now, at nearly 18 months, her language continues to shock me.
'Let's go, Mummy,' she said earlier, grabbing my hand. 'Giraffe sitting in Daddy's chair.'
I followed her through to see she had indeed placed her favourite giraffe on her father's computer chair. She knows what she wants and she's got the language to tell me. I think having two big sisters chatting away all her life helped her learn to speak so early. Or perhaps she was just trying to get a word in. Whatever the reason, what's obvious when she happily sings every word of Twinkle Twinkle while building a tower of blocks is that she's a baby no more. Even as I tried to hold on to it, her tininess slipped away. I love everything she's become, but I can't believe it happened so fast. Will this just keep happening now? Will I blink and find they're all at school? Taking their exams? Going off to Uni? Getting married? When will their lives slow down? I want to make sure I don't miss them! 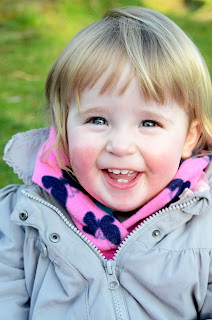 She's grown up so fast!