What's in a name?

This is something I've thought about often over the past few years. First, when I was working on a woman's weekly magazine, and then as I prepared to become a mother. Those nine months are a wonderful yet worrying time. Will everything go smoothly? Will the baby be OK? Who will they be? What will they become? What mark will they make in the world? The possibilities are endless. You grow them for nine months, go through the agony of labour, sacrifice everything so they can have whatever they need, all so you can give them a chance, a chance of being successful, fulfilled, happy. So how, I asked as I recently caught up on One Born Every Minute, can you pant and scream and push a child into the world, look into their beautiful, innocent eyes, full of wonder and possibilities, and name them Kale?
Don't get me wrong, Kale is a great name. As long as you are a nutritious leafy vegetable.
I just don't get the recent fad for making up names. Or making up spellings of naming. Or adding accents and hyphens and, apparently in one case I heard of recently, numbers? I just don't get it. It's not you who's going to be stuck with this name for their whole life. You're saddling someone else with it. How can you seriously go with Kale? 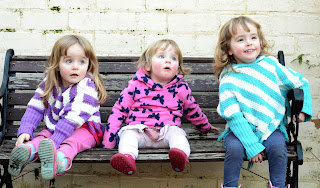 Should I have chosen their names after dinner?

It's not a matter of taste, I'm talking about. Of course everyone likes some names more than others. There are some I wouldn't choose, but have no problem with anyone else doing so. At least they're names. For all three of our girls, we chose slightly more old-fashioned names. I adored several names on the Top Ten lists, but we didn't want our girls to be one of many, so we went for less popular but classic ones no one would have trouble pronouncing or spelling. Well, so we thought. I was gutted after the twins' arrival when some congratulations were sent with an alternative spelling for T's name I hadn't known existed. Luckily, her version is more common, so hoping it won't be a problem. Having to spell your name is a new, but annoying experience for me. It's only in recent times that I've had to answer the question: 'Is that Amy with a Y?' When I was younger, that was the only option. These days, there are Aimees and Ammees and heaven only knows what else. It's all go so complicated. We hated the idea of giving the girls names they'd spend their life spelling or correcting or explaining.
Working on a popular woman's weekly mag, I'd seen a huge array of names, from the unusual (the impressively punctuated Kaytee-Lee'ann springs to mind) to the downright bizarre (a whole family of Greek gods from Achilles to Aphrodite). And it gets worse. A quick Google search revealed that someone in this country last year named their son Buzz-Bee. Yeah, maybe a rock star's son can get away with it. But what if he wants to be a doctor or a lawyer or simply go to school without being bullied?  Why do parents do it? Why? Do they think an unusual name is going to set their child apart, give them a chance for a better life? Or is it all about them? Do they want everyone to see how kooky they can be? How clever. But it's not clever or funky or witty or cool. It's cruel. It's not your name. If you want to be funny, change your own one. You can't guarantee your child will like your choice, but at least do your best to guarantee they won't be embarrassed. It's your first act of parenthood. Your first chance to put someone else first. It's not about you any more, it's about them. Do you really want to name them after a vegetable?
Posted by Unknown at 23:30